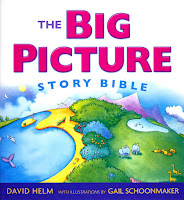 I have been introduced to the best children’s Bible I’ve ever come across. The Big Picture Story Bible by David Helm with illustrations by Gail Schoonmaker is fantastic.

Most children’s bibles are cringeworthy offerings. At best they are a loose collection of the exciting bits of the biblical narrative. At worst they are bibliotainment pieces using insipid and cliched devices dipping a toe into a shallow view of a vague God.

This Story Bible is not like that. It is a age-appropriate application of a robust biblical theology. Or, in the words on the back “a big book, about a big God, who keeps a big promise!”Just look at how it interacts with some key points of biblical theology:

The culmination is Part 23 – “God’s promise is explained” – where we read “Jesus opened up God’s holy book… In it were many word pictures that proved he must die to pay the penalty for sin.. In it we many picture that promised he would rise again.” (Pages 400-406) “Painted on the pages of Israel’s hard and happy history is the big picture of God’s forever king.” (Page 411) 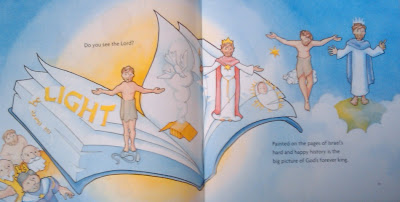 Can you see the theme of God’s “good word” and “God’s promise” and “God’s forever king” running throughout the story, tying it together, engaging with the substance of Scripture, not just the stories as stories.

This book is not just great for kids! As an introduction for all ages to biblical theology and the guts of the gospel, it is great.

Posted on December 16, 2009 Posted in Ecclesiology, Ministry and Depression No Comments

I had this piece emailed to me today by a member of my leadership team. Bill Wilson posts “7 Things Your Pastor Wishes You Knew, But Is Afraid To Tell You”

I’ll have to write my own list one day.

Posted on December 11, 2009 Posted in Ministry and Depression 2 Comments 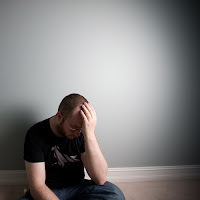 An interesting piece on “When depression leads pastors to suicide” at The Christian Century (H/T TitusOneNine):

Being a pastor—a high-profile, high-stress job with nearly impossible expectations for success—can send one down the road to depression, according to pastoral counselors…

When pastors fail to live up to demands imposed by themselves or others, they often “turn their frustration back on themselves,” leading to self-doubt and feelings of failure and hopelessness…

Nearly two out of three depressed people don’t seek treatment, according to studies by the Depression and Bipolar Support Alliance. Counselors say even fewer depressed ministers get treated because of career fears, social stigma and spiritual taboo…

For pastors, treatment can come at a high price. “You are committing career suicide if you have to seek treatment,” said Stanford, “particularly if you have to take time off.”…

Nothing particularly surprising there. Depression has certainly been part of my story as a man and as a pastor. There is a balance between unhealthy silence and public bleeding that is sometimes hard to find. And there is comfort in the gospel: a riposte against dark emotions with the truth that no matter what I feel nothing, nothing, absolutely nothing can change the way God feels about me, loves me, accepts me. The life, death and new life of Jesus proves it.

And I am heartened to hear language coming from the new generation of leaders (of the Acts 29 / In the Chute variety particularly) that includes admissions of weakness and an honesty about struggles.

There still needs to be care taken however. Much depression in pastors is amplified by a context of pharisaicism – a perceived understanding that “everyone burdens me with expectation but no one lifts a finger to help me.” It’s a fineline, for instance, between a healthy promotion of masculine holiness in the leaders of the church and the creation of a framework which breeds anxiety rather than encouragement.

Brothers, let us not forget grace.

I have just finished an excellent book. Robert Withycombe’s biography of Henry Montgomery, father of the famous WWII “Montgomery of Alamein” but here Montgomery of Tasmania – the fourth Bishop of Tasmania 1899-1901. The episcopacy of Montgomery has become a talking point for Tasmania’s eleventh and current Bishop and I was blessed with a pre-release copy to review.

The book itself is well-written. A decent biography is a history which is not hagiography. It will outline issues and impacts and provide connectedness to the world of the time. Yet it should also be a decent narrative, a character study, an insight that grips and engages. While admitting that as a Tasmanian cleric I have a natural affinity with the subject matter, I conclude that Withycombe has achieved this. A broad audience would find this book not just informative but enjoyable.

And like any good biography, it is not the author I am impacted by, but the subjects – Henry and Maud Montgomery.

I felt a certain yet imprecise resonance with the character of Montgomery throughout. Towards the end I encountered a specific connecting point. It was in the context of the Society for the Propagation of the Gospel (SPG), that great Anglican organisation that had provided the resources for many colonial churches such as Tasmania. SPG was about to experience it’s bicentennial in Montgomery’s time and we see a telling quote born of a frustration that rests on both affection and respect: “What are you to do… for a Mother who seems to have become dull and heavy?” (Page 252)

Montgomery was a man empassioned by the mission of the gospel of Jesus Christ. Into a pre-WWI world of colonial fervour he contextualised and embodied this gospel meaningfully and zealously. I look back on that era a century ago and I can see the fruit of his and so many other’s labours. So many of our buildings and organisations were in foment in that pioneering era. It is cause for great affection and respect.

But just as Montgomery looked at SPG and asked about a “dull and heavy” mother a stultified century on from her heyday, I feel to utter the same sentiments looking at the church of Montgomery. The passion of his era is now “dull and heavy,” diluted by generational changes that in the midst of a pain-filled 20th century took the forms but not the heart. And I wonder if Montgomery were here today whether he would look to the Anglican Church of his era and long for it to “burst its grave clothes” (Page 252) and find it’s passion and heart once more.

In this book we are given an insight into that passion and heart. To read about a Bishop demonstrating a real and living gospel, holding a roadside confirmation while walking near where I would spend my own childhood ninety years later stirs the soul (Page 88). To glimpse within the eloquence that which expounds “his belief that the Anglican Church’s primary vocation was to be a missionary agent” (Page 20) is to touch an eternal heartbeat. Even his frustrations – e.g. at the “archaic home practices” of “the old country with its grooves made by 1,400 years of settled life” (Page 28) and the attitudes of others who “have no ideas beyond those of an Evangelical clergyman in a suburban parish” (Page 104) – have a degree of inspiration. There is something to aspire to in the eulogising words of a “Mercury editorial on the day before he departed… ‘He has met the swagman on the road, and has talked to him, not as the Bishop of Tasmania, kindly condescending to notice an inferior, but as one man speaking to another, with the same earth to live on, and with the same God above them.'” (Pages 266-267)

And this is before you get to the more personal insights that Withycombe records in chapters focussed on Montgomery’s wife, Maud. Here we see a young wife, matching her husband in strength and passion, persisting through bereavement, and social complexities. We see them as mother and father finding a freedom in Tasmania to learn (some small aspect of) the preciousness of parenting. They live out that foundation of effective missionary zeal – “to go out, and stay out.”

It is these intangibles – passion, a missional understanding of ministry and episcopacy, an entrenched understanding that the church was “never merely to gather an nurture expatriate members of the Church of England” (Page 20) – that can be integrated into a current vibrant, relevant, fruitful vision for the Anglican Church.

It may be interesting to see how some of the quirks of Australian Anglicanism – such as the manner of choosing the holder of primatial office – came about. And it is worthwhile pondering some of the ecclesiastical principles that were debated at a constitutional time. But these are not the fundamental things of growing the kingdom.

Yet the hope remains that the intangibles can be grasped – that it not be, for instance, the existence of a St. David’s Cathedral that remains Montgomery’s legacy, but the focus on a “diocesan mission, unity and identity” (Page 27) which was his vision for one. Whenever we study our forerunners we have cause to grip more tightly to those things that are eternal and to loosen our grip on those things that so evidently will fade as grass.

That is the case of this excellent book. It is good to find a forerunner so close to home.

Montgomery of Tasmania is published by Acorn Press.

Posted on December 3, 2009 Posted in Ministry and Depression No Comments

I know very little of this situation but I was moved close to tears when I read of the suicide of Acts 29 network church planter Thomas Young of The Sanctuary Fellowship in Texas.

Wisely, some factual information has been released publicly:

Please pray for your pastors. There is a right expectation of high standards of our leaders but our pastors are sheep before they are shepherds and sometimes our hearts break. We are to be men, yet children of God. We are to be strong, yet demonstrate our Christ-dependence that flows from our weakness. We are to be morally upright, but without pretense of perfection. We are to lead the charge, yet always run to our Father’s arms.