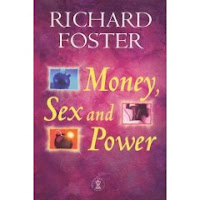 Money, Sex, Power by Richard Foster is an “oldy but a goody” book (I was only 10 years old when it was first published) that I’ve had on my bookshelf for years but have never got round to reading. Necessity breeds opportunity and so I dusted off the book to help prepare for a sermon series on “Power, Sex and Money.” I found it to be a not-too-heavy not-too-light introduction to these topics pushed forward by an evangelical and prophetic heart. Foster lists one of his reasons for writing a book on these topics:

“Historically it seems spiritual revivals have been accompanied by a clear, bold response to the issues of money, sex, and power… When these revivals occur in a culture, there is a renewal of both devotional experience and ethical life. We need a modern-day renewal of spiritual experience that is ethically potent.” (p3)

This intention echoes the beat of my own heart for the formation and transformation of the people of God’s church – a vision that I’m cogitating on publicly on my other blog in a couple of places). And, by and large, I appreciated how Foster goes about delivering his exhortation in this book.

One particular appreciation was his ability to bring each issue back to the core basis of a relationship with God – in terms of both positive and negative engagements with that relationship. And so, for instance, on the topic of money Foster writes:

“The farmers of ancient Israel had a keen sense of reality… They knew and understood on a very deep level that a good harvest was the gracious provision of a loving God… And so, as we learn to receive money and the things it buys as gracious gifts froma loving God, we discover how they enrich our relationship with God… Doxology becomes the posture of our experience.” (p40)

but only after he has shown us that

“The New Testament teaching on money makes sense only when we see it in the context of the “principalities and powers”… Money is one of these powers. When Jesus uses the Aramaic term mammon to refer to wealth, he is giving it a personal and spiritual character. When he declares, “You cannot serve God and mammon” (Matt 6:24), he is personifying mammon as a rival god. In saying this, Jesus is making it unmistakeably clear that money is not some impersonal medium of exchange… Mammon is a power that seeks to dominate us.” (p25-26)

“This radical criticism of wealth makes no sense to us at all unless we see it in the context of its spiritual reality. It is one of the principalities and powers that must be conquered and redeemed through the blood of Jesus Christ before it can be useable for the greater good of the kingdom of God.” (p31)

The exploration of the topic of sex I found to be the least helpful of the three topics covered. This was mostly due to style and emphasis rather than theological content. And I remain thoughtful about whether this is because engagement with the topic of sex by the church has become bolder in the last two decades (consider for instance Mark Driscoll’s infamous sermon on the Song of Solomon) – or whether I’m simply having a personal reaction: The last two decades have been extremely formative for me and I have moved beyond some of the more “sex education” (a la James Dobson) aspects of Foster’s presentation.

Nevertheless there was some good gems on the topic of sex – I liked, for instance, his description of how sex in marriage is a “celebration in the bedroom”:

“Frankly, sex in marriage should be a voluptuous experience. It is a gift to celebrate, excellent in every way.” (p138)

The main problem was something of a utilitarian (albeit kingdom-motivated) approach to issues of sex and marriage. I agree with certain comments. The following quote, for instance, echoes my own (rather simplistic) adage often delivered to those searching for a mate – “know where you’re going before choosing who you go with”:

“The basis for getting married that conforms to the way of Christ is a regard for the well-being of ourselves and others and a regard for the advancement of the kingdom of God upon the earth.” (p135)

“The basis for divorce that conforms to the way of Christ is, therefore, precisely the same as the basis for marriage. When it is clear that the continuation of the marriage is substantially more destructive than a divorce, then the marriage should end.” (p145)

“Jesus therefore spoke of remarriage as adultery, not because there was anything inherently wrong with it, but because of the attitude of contempt with which the man lived with the woman.” (p148)

If he does err, however, he errs on the side of grace and avoids unhelpful legalism. This is also something to be appreciated.

The section on power is based heavily, and effectively, on Christ as the example of how power is to be used by Christians. It is summed up well by his reference to the “marks” of “spiritual power” – love, humility, self-limitation, joy, vulnerability, submission, and freedom (p201ff).

Foster recognises the clear reality of spiritual power – particularly over the demonic and “power and principalities” of the world. But emphasises this Christ-like marks as the basis for that power, for instance:

“… we defeat the powers by an inner renunciation of all things… we have nothing to lose; the powers have no control over us. Suppose the powers take our goods and possessions – no matter, our possessions are only on loan from God; protecting them is more his business than ours… reputation… fear of death… we belong to One who can lead us through death’s dark pathway into greater life… we simply have nothing to lose. We are positionless and possessionless, and this complete and total vulnerability is our greatest strength. You cannot take something from someone who has nothing.” (p191)

I particularly appreciated what basically amounts to advice given to those who find themselves in Christian leadership and must keep their eyes firmly fixed upon Jesus lest they become full of themselves. Some gems of advice include:

“Small things are genuinely big things in the kingdom of God. It is here we truly face the issues of obedience and discipleship. It is not hard to be a model disciple amid camera lights and press releases. But in the small corners of life, in those areas of service that will never be newsworthy or gain us any recognition, we must hammer out the meaning of obedience
. Amid the obscurity of family and friends, neighbors and work associates, we find God. And it is this finding of God, this intimacy with God, that is essential to the exercise of power. The ministry of small things must be prior to and more valued than the ministry of power. Without this perspective we will view power as a “big deal.” (p219)

“Those who exercise spiritual power mus be prepared for alonenes… I did not say loneliness… Aloneness means having to decide and act alone, for no others can share the burden or even understand the issues involved… Most poignant of all is the scne in the garden of Gethsemane where Jesus singled out the Three to watch and pray with him. On that holy night they abandoned their Master for sleep, and Jesus was forced to wrestle with the powers alone. We too must wrestle alone. We cannot even depend upon our husband or wife to understand what is occuring in the inner sanctuary of our soul… James Nayler wrote of the aloneness of divine intimacy and power, “I found it alone, being forsaken. I have fellowship therein with them who live in dens and desolate places in the earth, who through death obtained this resurrection and eternal holy life.” Aloneness is the price of spiritual power.” (p220-221)

The book was written more than two decades ago. But some things never change – even specific things in the last twenty years such as debates on homosexuality (“…homosexuality is so volatile a matter right now in the Christian community…” (p106)) and use of military power (“Military strategists plot, not how to make the world more stable, but how to make it less stable. Terrorism and spy networks are the order of the day.” (p188)).

In the end, the usefulness of this book depends upon the readers willingness to be renewed – to be changed by God and convicted of error and disobedience in these heart-felt areas – to embrace the heart of the a re-engaged ethical “vow” that bring the areas of money, sex and power, under Christ’s authority in our lives. It is in these areas that Christians are often, in practical terms, atheistic in their actual conduct. Read this book, but especially if you think that if you’ve got it all sorted out – it may just wake you up.